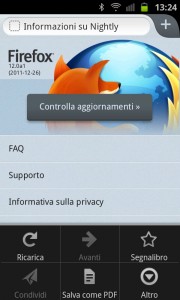 Not without difficulties or issues, but it seems we finally have a localized native build on Android. Kudos to all people involved, I’m pretty sure there’s a lot of work behind this small screenshot (and there’s still a lot more to do).

Having said that, I still wish for better communication toward the project’s “periphery” (see for example how lively mozilla.dev.platforms.mobile is). When I found out that a native build was going to be released as Firefox 11 I was seriously annoyed: what about localized builds? Then I discovered on Mobile Test Drivers‘ mailing list that localization for Firefox 11 would start on aurora instead of central. Good to know, too bad I had absolutely no clue about that 😉